The consequences of “Arab spring” (2011) for Middle East and Northern Africa: main risks and threats 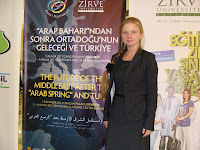 Dear Mr. chairman, dear participants of this international conference, please let me introduce you the the Ukrainian vision of the risks and threats for security of the Middle East and Northern Africa region in consequence of the events of “Arab spring” 2011. By the honor of having a chance to make a speech today I’d like to contribute the highest salutations from the administration of National Academy of Public Administration, President of Ukraine, in particular, Sergiy Teleshun, head of Ukrainian National Committee of Platform “Dialogue of Eurasia”, head of Political Analytics and Forecasting Department National Academy of Public Administration, President of Ukraine.

The modern regional system of international relations at the Middle East and Northern Africa had undergone some major changes, which were caused by mass disorders at the end of 2010 and at the beginning of 2011. Large-scale protests were burst in Tunisia, Egypt, Algeria, Jordan, Yemen, Syria, Bahrain and Libya, as well as demonstrations of unrest were held in Mauritania, Saudi Arabia, Oman, the Sudan, Iraq, Kuwait, Lebanon, Somalia, Morocco, Western Sahara and Djibouti.
It is essential to point out, that the current acute system crises and conflicts not only within the Middle East and Northern Africa region but also in general are stimulated by the processes of searching by nations and states of the new forms of coexistence and realization of their political, economical, social and humanitarian projects. The same crises are provoking the structural changes in specific regions and in the world in general. In this context, it is significant to make a point of Alexander Teleshun’s idea of the statement that the core Europe crisis is not the matter of development of civilization it is a matter of absence of workable behavior models of the national states in terms of unstable political and economical system and predictable reaction and possible actions on the threats of XX century [1].
“Revolutionary Arab spring” has created prerequisites not only for changes of the ruling regimes but also for transformations in the political landscape of certain countries, as well as redistribution of spheres of influence and establishment of the new borders of zones of geopolitical responsibility of the main actors of international relations in the region of the Middle East and Northern Africa.
Nowadays it’s became obvious that there are no constant formal institutions in the region of the Middle East and Northern Africa that can support regional stability. Events of 2011, especially situation in Libya, proved inefficiency of existent institutional structures, particularly League of the Arab States, on the issue of safeguarding the security in mentioned region.
To stabilize situation in the Middle East and Northern Africa region it is proposed to elaborate the common vision of risks and threats to security of countries of this region within the frame of LAS at the national and regional/interregional levels.
It is essential to point out the significant importance for Ukraine to acknowledge the events that took place in the Middle East and Northern Africa in 2010-2011 years. Analyzing aftereffects of “Arab spring” as well as defining their risks and threats for the region and world within the frame of implementation of Ukraine’s Middle East foreign policy direction.

The consequences of the “Arab spring” (2011) for Middle East and Northern Africa states
There has been no tangible change in the socio-political order in any country which were embraced the revolutionary wave. Thus, it is not correct to implicate that the mass strikes that took place in Middle East and Northern Africa were revolutions in the classical sense of this term. There is a common idea that these events can be defined like spontaneous outbreaks against the authorities, rebellions, riots and armed conflicts. For example, the presidential change in Tunisia and Egypt has not yet led to any visible fundamental social or political transformations in these states. Libya is suffering badly from the lack of coordination in the decision-making process of its opposition as well as leadership which can lead the country to long-term civil war. Therefore, the euphoria, in which the Libyan nation soaring after the homicide of M. Qaddafi, will not stay long. It is obvious that the majority of the experts are right claiming that the possible continuation of political crisis in Libya will cause another military intervention into the internal affairs of Tripoli.
Extensive reforms in all spheres of public life have been started in the Arabic countries (Kuwait, Jordan, Oman and Algeria) by its leaders lately, though there weren’t any changes in the ruling regimes. The similar outbreaks were suppressed in Saudi Arabia and Bahrain yet the strikes in Syria continue to escalate. The President of Yemen has agreed to relinquish his powers in exchange for personal security. Moreover the positions of radical Islamist organizations have been enormously straighten especially in Egypt, Syria, Libya and Yemen.

Conclusions. The development of the situation in the Middle East will depend not only on the ability of the states of the region to stabilize the political situation, but also from further redistribution of spheres of geopolitical influence by actors of international relations who are motivated and have a clear interest in the resources of the area. The rising on the political map the number of nationalistic orientated oppositional forces leads to further escalation of state of affairs inside the region, moreover the possible sharpening of the inter-clan confrontation for powers as well as possible loss of control upon the export of resources will inevitably lead to another military intervention of Western pursuing the aim of stabilization of the situation and obtaining of the total control over the oil upstream and supplies in the region of North Africa and the Middle East. However, in these circumstances USA and the key Western European countries will have to take into consideration the renewed Middle East vectors of foreign policies of China and Russia as well as the interests of the Turkey-Iran military-strategic tandem. The efficient situational military-strategic alliance between Turkey and Iran could lead to the creation of a new regional center of power opened for other Muslim countries. The idea of development of such alliance as an attempt to implement the Turkish project of establishing the Eurasian community commonly supported by European Union countries. They expect that the full-scale involvement of Turkey into the processes of regional integration in the Middle East will completely undermine its efforts to obtain the EU membership. Though, they do not take into account the fact that this possible Turkey-Iran alliance will have a military-strategic component (not economical) which will lead in the future to the strengthening positions of these core states as well as of the Middle East as a separate regional security complex with clear homogeneous pattern and to a fixation of the explicit zones of geopolitical responsibility and control over the energy resources. Thus all attempts of Western states to support further dialogue with pro-Western regimes will fail to as western-type modernization of Arab world is practically impossible; the situation of Iraq evidently proves this fact.

Positioning of Ukraine. The Ukrainian State is interested in establishing the stability of Middle East and Northern Africa. The excessive interest of Ukraine is determined by the problem of determination of the position of Ukraine in the Middle East regional processes as well as the relevancy of assurance of realization its geopolitical and geoeconomical/energy interests. In this context, Kiev is interested in searching of new forms of cooperation with the states of this region in the following spheres: (1) maintaining the civil order and post-crisis settlement; (2) the reducing of the possibility of armed conflicts; (3) anti-terrorism efforts; (4) combating with the proliferation of weapons of mass destruction. The main objective of Ukraine’s Middle East strategy is the searching of the new ways of possible cooperation with key states of the region: Turkey, Iran, Israel.
It is considered that Ukraine’s participation within the processes of post-crisis settlement and stabilization of political situation in the Arabic countries will promote its image not only within the region but in rest of the world as well. The Ukrainian State also can be interested in the projects of reconstruction of infrastructural objects in the conflict zones. 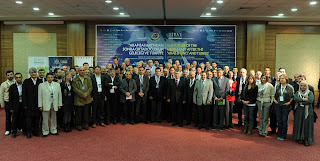